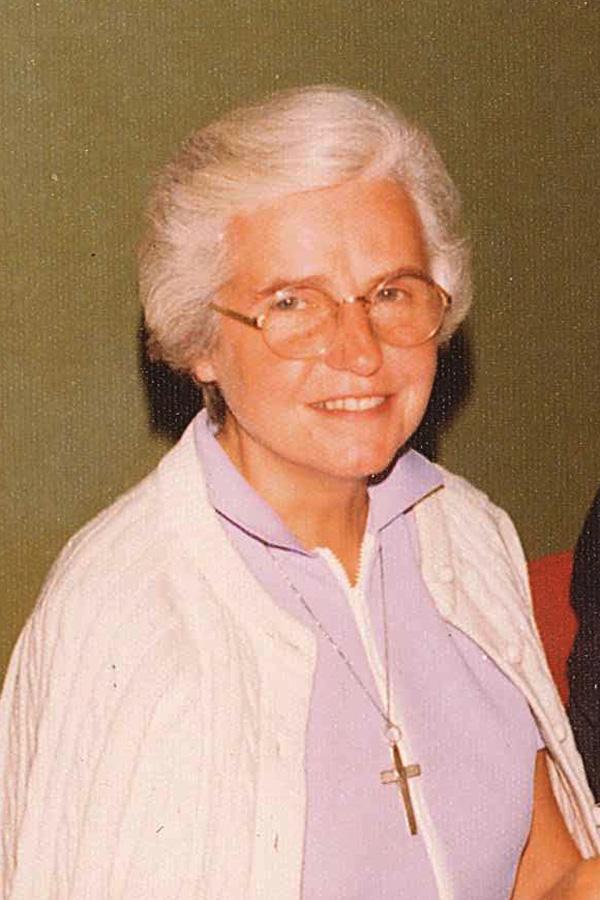 Margaret Mary Coakley, RSCJ, who walked with many women as they began their lives as Religious of the Sacred Heart, died Saturday, July 2, 2011, at the age of 91. Intelligent, passionate and dedicated to a more just world, she was a woman who cared deeply about others. Her charismatic leadership helped to forge new paths for the Society of the Sacred Heart following Vatican II, including a renewed focus on ministries to the poor.

A funeral Mass will be celebrated in New York on Friday, July 8, at 11:00 at Mary Manning Walsh Home, 72nd and York. Burial will be at the Society of the Sacred Heart cemetery in Albany.

Sister Coakley – who was known to her friends as Mavi – was born April 11, 1920, in Cleveland, Ohio. Her parents were John A. and Marie Louise Beckman Coakley. Her brothers John, Jr., Henry, Thomas, William, Joseph and, and her sisters Mary V. Morton, Agnes Power, Ann Egan and Tish O’Neil all preceded her in death. She is survived by numerous nieces and nephews.

Sister Coakley entered the Society of the Sacred Heart at Kenwood Convent in Albany, New York, in 1942 and professed first vows in 1945. She made her final vows in Rome in 1950.

An educator to the core, Sister Coakley spent several years in the classroom, but it was in her role as mistress of novices (1959-67) that she influenced future generations and earned the boundless devotion of her fellow religious. She also served the Society of the Sacred Heart as provincial of the former New York Province, 1968-74.

Her educational experience included teaching at Sacred Heart schools in Grosse Pointe, Michigan, and Providence, Rhode Island, and at Kenwood. She also served as mistress general and superior at the Convent of the Sacred Heart at Noroton, Connecticut.

In 1976, Sister Coakley joined the national staff of the Theology in the Americas project in New York, where she edited and published scholarly works, especially in liberation theology. It was her experience there that led her to the Women’s Coalition to Stop U.S. Intervention in Central America, where she worked 1983-85.

From 1985 to 1994, she served as assistant director at the Center for Educational Design and Communication in Washington, DC, a ministry of the Society of the Sacred Heart. She then began a ministry in 1994 – when she was well past usual retirement age – coordinating escorts for senior citizens in New York City to assist them with their errands.

Active ministry ended in 2006, when Sister Coakley was seriously injured when struck by a car.

Into The Manor Born
“Into the manor born,” was, in her time,
a term used to describe a life of privilege.
Born on April 11, 1920, Aunt Mavie lived at Berkshire.
The war was over, she danced with her brother, Hank,
to music of Gershwin and Cole Porter;  went to Europe,
then graduated from Manhattanville College in 1942.

She gave it all up, turned her back on manor life;
embraced a life of prayer, entered the Convent.
Cloistered, she could not go home to bury her brother,
Hank, or attend weddings of her sisters and brothers.
Headmistress at Noroton, she gathered nieces,
arranged for their education of  “noblesse oblige.”

As Mistress of Novices, Mother Coakley left not her order,
but reordered her priorities:  rallied for the poor,
underserved, disenfranchised, the needy;
“walked the walk” at Varnum St., in Washington, DC;
took photos of flowers, pasted to cards sent to those she loved.
No longer cloistered, she buried all her siblings with care.

Finally, Sr. Coakley moved to an apartment on the West Side,
in New York City,  a tiny space she shared with RSCJ companions;
worked at ENCORE, with Srs. Elizabeth, Lillian and Peggy;
addressed the needs of the elderly, those forgotten tenants,
who lived in apartments:  one of them an aging “Rockette,”
who danced for years at Radio City Music Hall.

On Saturday, July 2, 2011, Mavie was born into the Manor of God.
It was the Feast of the Immaculate Heart of Mary.
Hearts of all who loved her are joined with her community,
The Religious of the Sacred Heart of Jesus, to give thanks for those
who touched her life, those who cared for her, especially Sr. Joan Kirby,
Sr. Judy Garson and Sr. Kathleen Cox, who tenderly brought her home.

In my now senior lifetime, no person brought me closer to the Lord than Mavie. I am eternally grateful  for this great gift above all others.
Sheila Flynn DeCosse, student at Noroton in the early 50's.

Mavi Coakley,rscj was all these and more to me over the last 55 years. She greeted me at Noroton when I arrived as a nervous, dependent 3rd Academic student in 1955. As Superior, she had visits wiht the studnets and soon became my Spiritual director(although at the time I did not know the term). She guided my vocation. In 1959, as I was packing to leave for Kenwood, I received the letter saying Mavi had been appointed Mistress of Novices! Was I pleased or scared? A little of both. During my three years of Noviceship she was very demanding of me and at the same time very loving. She even maintained contact during the Black Juniorate year - she took the Black Juniors on a monthly picnic to Pooh's Corners. After I left the Society Mavi and I kept in touch. I saw her in Greenwich and she invited me for lunch downstairs,"so that  you can get used to the new order of things". She followed me in interest and prayer through my father's accident, my marriage, the births of my three children and my divorce. Then I disappeared. Mavi told me later when I reconnectd that she had continued to pray for me daily. On that visit to DC. she came to the hotel where I was attending a conference to escort me to Susrsum Corda and later took me back to the hotel so I "would be safe". I saw Mavi infrequently after she moved to NYC, mostly at celebrations at 91st St. and events at Kenwood. However she continued to be a Power of Example in my life, her love of prayer and her fidelity to it, her caring for ALL people regardless of circumstances, her devotion to the poor. I always knew she was in my corner if I ever needed her. Her consistency in relationships also inspired me.
On Wednesday the TV Mass presider celebrated the Mass of St Maria Goretti. The Gospel for that day  was about the seed that falls into the ground, dies and produces much fruit. I was jsut adjusting the the fact that Mavi had gone to God and thought AHA we can pray to her for vocations to the Society! I remembered that she used to be as excited as we were when we reached 100 in the Noviceship.
Rest in peace Mavi and enjoy eternity with your Lord.