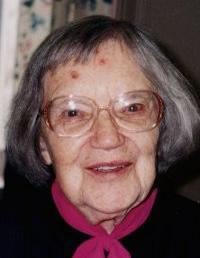 From 1955 to 1968, Sister Husson served as president of Newton College of the Sacred Heart in Newton, Massachusetts. During her administration, the college more than doubled its enrollment, established a program funded by the Ford Foundation for disadvantaged high school girls, and introduced a study of theology that incorporated a broad spectrum of theological positions while sustaining its Catholic orientation.

Sister Husson joined the Religious of the Sacred Heart in 1929 at Kenwood in Albany and made her final profession in 1938 at Villa Lante in Rome. She received her B.A. in chemistry, with a minor in education, from Manhattanville College, Purchase, New York. She also earned an M.A. in english from Boston College and an M.A. in religious education from Providence College.

Before retiring to Albany, Sister Husson was active in community organizations in and around the Boston area including Cambridge Residents Against Crime, the Cambridge Council on Aging, and the Banking Committee of St. Pauls’ Church, Cambridge.

She was born in Rochester, New York, in 1911; her parents, both deceased, were Gustav Husson and Alice Glennon Husson. Sister Husson is survived by her half-brother Christopher Husson of Pittsford, New York Her sister Alice, also a Religious of the Sacred Heart, passed away in 2007.

A Memorial Liturgy will be celebrated for Sister Husson in the Teresian House Chapel on Wednesday, July 7, 2010 at 10:00 AM. Interment in the Kenwood Convent Cemetery will follow the liturgy. Memorial contributions may be made to the Society of the Sacred Heart, 4120 Forest Park Avenue, St. Louis, MO 63108.

Gabrielle had such a long life well lived.  She was ready to move on. Now she's finally at peace. Lord Bless her soul.

She will always be "Mother Husson" to me.  Such a wonderful woman, and so approachable and caring.  I can visualize her now, joyous in God's presence, with her sister.
Medora Houston,  formerly called Dodie Burnett
Newton Country Day 1962, And NC, 1966w

A woman of great faith and conviction, Mother Husson, as I remember her, was also one of the most down-to-earth people I've met. When President of Newton College of the Sacred Heart, she was always available to her students.  Many was the  time she gave sound and compassionate advice to me and others.  Her keen intelligence, kindness and generosity are not forgotten. May she rest in peace.  Thank you, Mother, for all you represented to your Newton girls!

Freshman year at Newton College, first day - Theology class, Mother Husson started with "everything you have learned so far about your religion, probably wrong."  I have quoted her so many times over the years.  She got my attention.  I am still grateful to her.  (When I again met Mother Husson at a reunion and quoted her, I swear she blushed but she laughed and she looked pleased.)  I learned from her.

From the first moment of Welcome when I arrived, alone, a full day before classes at Newton, Mother Husson (I shall never be able to think of her by another name) saw me, came out of her office and gave me a hug!  Her warmth and kindness was exactly what I needed to set the tone for my college experience.  Her guidance and example were an important part of those 4 wonderful years, and she has lived on, as she will continue to do, as a part of my life.

She was a blessing to so many young women and touched so many lives.   I expect that there are, and will continue to be, some joyous reunions in heaven!

She was the true center of the Newton College faculty.  A very warm woman and an excellent teacher.  She was the heart and soul of our formative years at Newton.  We carry vivid memories of her grace down through the years.

She will always be Mother Husson to most of us Newton alums.  She was an amazing, strong woman and it was a privilege to have known and loved her.

Mother Husson was President of Newton College and very approachable. I remember her standing outside of her office door with a smile on her face.many times. Still she ran the WHOLE college and had time for us too.

"Mother Husson"'s spirituality and leadership were gifts to all us at Newton College, Class of '63.
It is consoling and good to know that she is now resting with the Lord.

As with so many ---she will always be Mother Husson.
May she rest in peace.
Missy Clancy Rudman, NC'61

Whenever I think of Newton College, the very first name I remember is Mother Husson.  She was the epitome of a highly educated and warm Catholic leader.  The class of Newton '65 , along with everyone else, were lucky to have her.

I will always be grateful to Mother Husson. She hired me in 1963 to run the student infirmary and to pursue my B.S. in Psychology. She was a wonderful President, teacher, and confidant. I later obtained a MSW and still work as a family psychotherapist. She truly was a vital part of my personal and professional life. Thank you, Mother and may you enjoy your reward now in Heaven. You will be missed. Respectfully, Joan Bishop Smith ,Class of 1965

Compared to the sacred heart girls who were well prepared in both theology and philosophy, i was woefully unprepared. my freshman year.  Regardless, Mother Husson demanded a higher level of thought.  I thank her for this faith and confidence in us all..
Elizabeth [N.C. class of 1968]

Mother Husson was formidable yet approachable during my college years - she was always the President but looking back she was much more than that - a kind, loving, motherly, always available when you needed her.  I always thought she took special interest in my sister and me due to her close friendship with Mother Mary Quinlan who was our Mom's best friend growing up.
We were very fortunate to keep in touch through the years, never enough however!!  Wish you all could have enjoyed the wonderful  long lunch we had in a Cambridge  restaurant one afternoon - Mary Ann Keyes and I sat for hours talking to Mother Husson and Mother Quinlan, it was so special finding out who they were, what they did after Newton closed and some of the "inside" scoop of other alumnae and nuns. We all were "Chatty Cathys" as the restaurant flicked on lights to tell us dinner was being served!!  No, Mary Ann and I didn't write a book!!!      Mary Ann informed me recently that she, my sister, Judy,  and I enjoyed a similar kind of  fun lunch at her house.  It was wonderful to have such nice memories of our teachers and President.  We can be sure they are watching over us still.

I have had the undeserved blessing of getting to know Gabrielle Husson in a very special way…Not only as my teacher at Newton Country Day School, or Headmistress there, or as President of Newton College, but as a very selfless, caring woman with a brilliant mind, keen sense of humor, and intense love for all of her friends and students, totally devoted to the Sacred Heart. How blessed I am to have had this friend for so long. Thank you Sister Husson. May you now enjoy the reward you so richly deserve.  Rosemary Stuart Dwyer, Newton Country Day School 1954, and Newton College 1958.

I didn't know a soul when I arrived on my first day of freshman year at Newton in 1961.  But I still vividly remember  encountering Mother Husson on the front steps of Stuart on that day and she said, "Good Afternoon, Linda.  Welcome to Newton."  Later I found out that Mother Husson had memorized the name and picture of every incoming freshman!  What a warm gesture and what a brilliant woman.  May she rest in peace!

I feel extremely blessed to have had the privilege of a Sacred Heart education while Mother Husson was president of Newton College.  I remember her so well, she will always be "Mother Husson" to me too.  May her soul rest in peace.
Betty Hitchins Wilson, NC '61

Peace to Mother Husson
Along with the other strong, intelligent, dedicated Religious of the Sacred Heart at Newton College in the late 1950s, Mother Husson was fundamental in providing the students with an excellent education  - both spiritually and academically.  I am so grateful for her commitment to her mission, and for her equanimity as President of the College.
May she now rest in Peace.