Until the recent storms the weather had been relatively mild; thus, even though it hasn't officially started, spring has gradually been seeping into winter. Daffodils and crocuses had already begun flowering some weeks ago, but now I walk past front gardens quickening with wide, ruffly camelias and expanding magnolia, while shoots and early buds can be found everywhere else. We are gently gliding into that lovely season full of promise and unfolding new life, its yellows and rosy pastels a soft antidote to our near-universally grey skies. 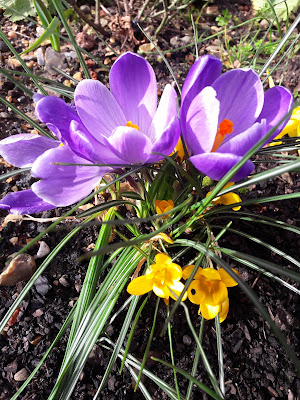 In our back garden all bar three of the crocuses are slender and delicate; bright striped butter turning to gold in rare bursts of sunshine. The three exceptions are purple, and much larger: even though they're in a tiny minority, they have clearly decided to make their presence known, their brashness reminiscent of a gang of playground bullies claiming their territory. Walking along Brook Green the other day I noticed some more purple aggression - this time, what must surely be the floral equivalent of a rugby tackle, performed by a lilac crocus on a white one.

What's this purple pugnacity all about? Are they simply desperate for as much of our fitful sun as possible? Or is it advance preparations for Lent, when their colour is dominant? Lent which should be a time of gentle unfolding, rather like spring, but can just as easily become a snappy, snarly time, as a lack of sugar or nicotine makes itself known during tiredness or stress. It can also be a time for knowing ourselves, and our own weakness, idiocies and infidelities, only too well; but for knowing, too, the depths of our yearning for the only One who can satisfy us, more than chocolate, Facebook or whatever else we're 'giving up' during these six weeks. Like these crocuses, we too want to look to God and be radiant... (Psalm 34), but hopefully we don't forget that we do so as part of a community. 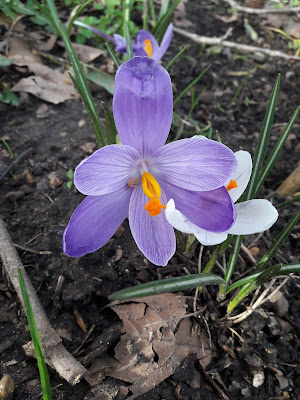 The other day, when not noticing belligerent flowers, I saw some words of Pope Francis on Twitter. They seem very apt for this journey into and beyond ourselves which we embark on today...

Every morning, God comes to find us where we are. He summons us to rise at his word, to look up and to realise that we were made for heaven.

A happy and blessed Lent to you all - may we all look up, radiant before God, and come to realise just how much we were made for heaven!