We've been calling them private Masses, but there's absolutely nothing private about a Mass being livestreamed potentially around the world. That's how so many of us experienced the Eucharist today; and not a normal Mass, either, but one shorn of servers, choir, readers and processions, its virtual congregation united, even while largely unaware of each other. 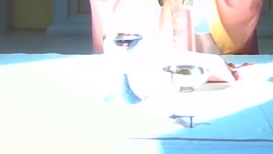 One effect of this for me was an even stronger focus on the Eucharist itself. And in the one I attended, the webcam angle meant a closer, more elevated view of the altar - which meant being able to observe the effects of a shaft of strong, dazzling sunlight, seeping slowly across the surface. By the time we reached the consecration, both chalice and ciborium had been subsumed by the blazing white radiance, resplendent even as they partially disappeared. And I thought - this is how Jesus must have appeared in his Transfiguration, when his face shone like the sun and his clothes became as white as the light (Mt 17.2).

The priest had in fact spoken of the Transfiguration during his homily, reminding us of our Lenten journey through the Sunday Gospels; reminding us, too, that in his encounters Jesus transfigures others - the Samaritan woman last Sunday, the blind man today. And that, really, lay at the heart of Jesus' life and mission - not only to preach or heal or work miracles, but to transform others, completely, from their very core.

Jesus' desire to transform and transfigure us never ceases, even - especially - in these terrifying, disorientating times. In what ways is he asking me, today, to co-operate with this desire? And how can I live his mission of transfiguration, whether in company or isolation; through my prayer and contemplation, my care and concern, and my presence, virtual or not?

And you, if you attended a streamed or televised Mass - what new gift or insight has God given you thanks to this?