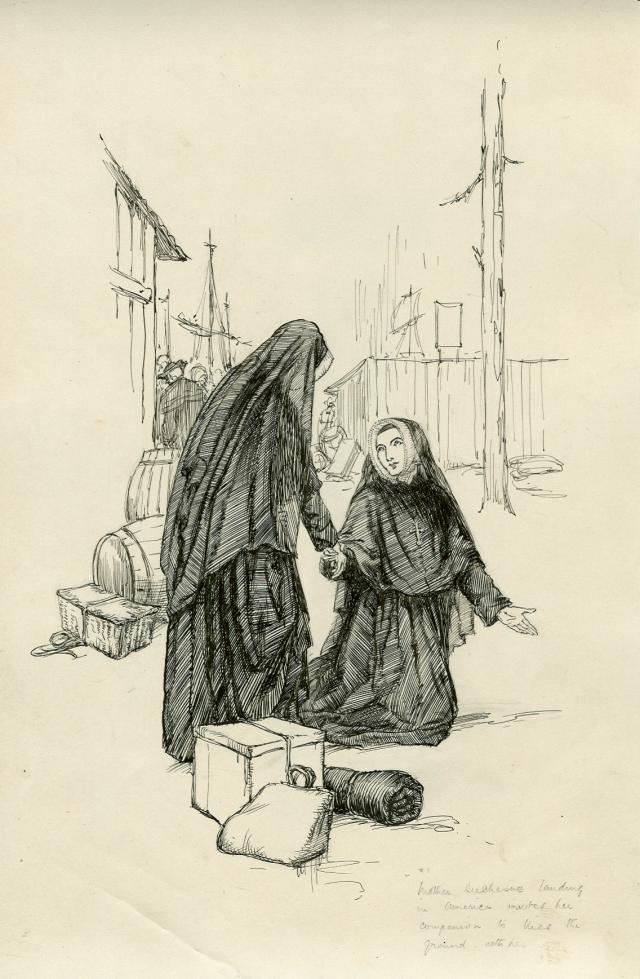 On February 9, 1818, Philippine and her four companions said good-bye to Madeleine Sophie Barat, the community in Paris, and to her beloved family, many of whom had come to the city for her departure. This marked the beginning of a six-month journey that would take them from France to St. Louis. For all except Eugénie Audé, this journey would last for the rest of their lives, as she was the only one who ever returned to France.

Before leaving her homeland, Philippine took some time to write a letter to her community at Sainte Marie d’en Haut. In this letter she spoke of the past and implored forgiveness for her many faults, at least as she saw them. Then she wrote of the sacredness of this moment in her life and of the future. This is what she wrote:

Ordinarily (God) gives one outstanding grace to a soul, and this grace becomes the source of many others. In my case, that signal grace was my return to Sainte Marie and membership in the blessed Society of the Sacred Heart. This was far beyond anything I had hoped for. And still – in spite of the fact that I have profited so poorly by all the instructions and the examples of solid and sublime virtue I have received – still God in his goodness is opening to me a new career that calls forth all my gratitude and overwhelms me with confusion when I think of it.... (Callan, 147)

We might have expected her to name some earlier grace received through her attraction to the life of a missionary, or some gift of God received in her several stays in Sainte Marie. But when she wrote of the “signal grace” of her life, she did not recall her initial attraction to mission life, nor the many graces she had received at Sainte Marie – as a student and later as a novice.  Instead, she referred to her meeting with Madeleine Sophie Barat in 1804 and her decision to join the fledgling congregation dedicated to the Sacred Heart of Jesus. Philippine sensed that life in this new congregation would enable her to live a life that was both contemplative and active. She embraced the new form of religious life for which Sophie was struggling at that moment and for some years to come. Philippine must have realized that in some way this new life would give her more opportunities to make her love of God incarnate.

What were some of the manifestations of her own incarnate love?  First of all, Madeleine Sophie Barat, who, despite the fact that she was ten years younger, became for Philippine a mother, a sister, and a friend. Their friendship was the mainstay of her life. The correspondence they carried on when separated by the Atlantic Ocean gave vitality and inspiration to each. Despite the difficulties of communication, the months, sometimes even a year of waiting for an answer, Philippine cherished the letters of the Mother General. She looked forward to sharing the joys and difficulties of life in the New World with Sophie and seized every opportunity to send a letter back to France. The day before Philippine died, Anna Du Rousier arrived in St. Charles to give the dying saint a last blessing from her friend and guide. This seems to have been God’s own affirmation of their love and friendship.

Throughout her life she kept in touch with members of her family. When she learned of the death of Aloysia Jouve, her sister’s daughter who was also a Religious of the Sacred Heart, at the age of 25, she wrote to Father Louis Barat, “... our Mother ... gave me news of the agony my dear Aloysia is enduring. But when one is out here on the other side of the ocean, one can only hope to see one’s loved ones again in heaven. It is there I picture them all....” (Callan 235)

She was a loving superior and mother to those in her community. Octavie Berthold wrote to Madeleine Sophie: "Charity binds us closer and closer to our Mother Superior. I obey her, but my love for her is so great, it may deprive me of the merit of obedience, for it sometimes makes my motive too natural." (235)

She loved the children in the schools she founded, and as we all know, she had a special predilection for the “Indians” or Native Americans. Her goodness and generosity to the Jesuits in Florissant are proverbial, and despite the Rector’s severity, nothing prevented her from continuing to love and nurture the Jesuit novices and to contribute to the welfare of the Superior, Fr. Charles Felix Van Quickenborne. These relationships lasted until the end of her life. Two of the novices, Peter de Smet and Peter Verhaegan, were instrumental in her going to Sugar Creek, and Fr. Verhaegan said her funeral Mass.

Her heart grew and expanded in the New World, but as these few examples illustrate, it was a suffering heart. Nor did she hesitate to take on the most practical, mundane, and menial tasks at St. Charles and Florissant. It was she who often took care of the cows, or the chickens, or the hogs.

The signal grace – the source of many others.

Can we name the “signal grace” of our own lives, that grace which becomes the source of many others? …The seminal grace of our lives may be a realization that one has met the friend and spouse of one’s life; it might be the birth of a child; it could be a change of direction or a friendship. For some of us it has been a vocation to religious life or to the priesthood. It might also be a call within a call as that vocation begins to unfold. All of these gifts grow and develop through the journeys of our lives. All of these gifts involve the crossing of boundaries: from the limits of self to embrace the experience of the Other; from the limits of our culture to recognize the gifts of another culture; from insecurity and doubt to faith; from self-absorption to love.

In one way or another, through one experience or another, God will draw us to love. We are called to an ever-deepening love. What might Philippine have to say to us this evening? Perhaps she would borrow the prayer of St. Paul:

I kneel in prayer to the Father, from whom every family in heaven and on earth takes its name, that out of the treasures of his glory he may grant you strength and power through the Spirit in your inner being, that through faith Christ may dwell in your hearts in love.  With deep roots and firm foundations, may you be strong to grasp, with all God’s people, what is the breadth and length and height and depth of the love of Christ, and to know it, though it is beyond knowledge. So may you attain to fullness of being, the fullness of God himself. (Ephesians 2:14-20).