Philippine honored in a special way in St. Louis 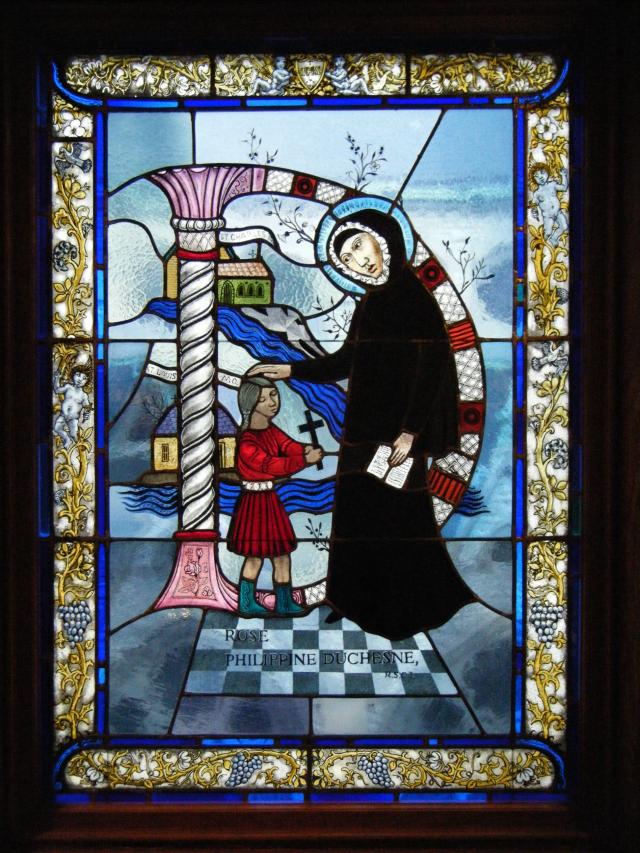 I came to know the Society while living in St Louis, and so it was natural that I learned about Philippine in a special way.  I’ve always felt close to her, in part because her story fit in with my own. The names of the Jesuit fathers she met in St Louis and Florissant were familiar to me when I began to know her story.  Father Verhaegen, S.J., has a building named after him at Saint Louis University, where I did my graduate studies. Father De Smet, S.J., was familiar to me from growing up in Montana, where he went to minister to the Flathead tribe. I had visited his St. Ignatius Mission in college, and I found myself fascinated by the warm welcome he received when he went to serve the Native Americans. So, meeting Philippine and learning about her deep desire to serve in the American West fit in with my world in a way that a French order of religious women did not at first.

This image is from a set of four windows found in Saint Louis University’s Pere Marquette gallery. What now serves as an art gallery is the university’s original library room, in DuBourg Hall (named for Bishop DuBourg, who both invited Philippine to his diocese and founded Saint Louis University in 1818). In addition to Philippine, the windows portray Elizabeth Ann Seton, Gerard Manley Hopkins, and Pierre Teilhard de Chardin. Philippine is certainly in good company!

The window itself shows the two rivers, the Missouri and the Mississippi, which meet just north of St. Louis, an image which has become part of the city’s self-identity. The Indian child, with her braids, boots, and cross, receives Philippine’s loving attention. It is certainly not the most endearing image of Philippine, but it represents for me the coming together of different facets of my life.

The four windows show the diversity of thought and gifts that are welcome and fostered in our church. Alongside Philippine’s audacious generosity, we see Seton’s charity of education, Hopkins’ lively poetry, and Teilhard’s cosmic spirituality. This is truly church in which we each can find a place to use our unique gifts to show God’s love in the world.