Her prayer was a quiet looking and listening 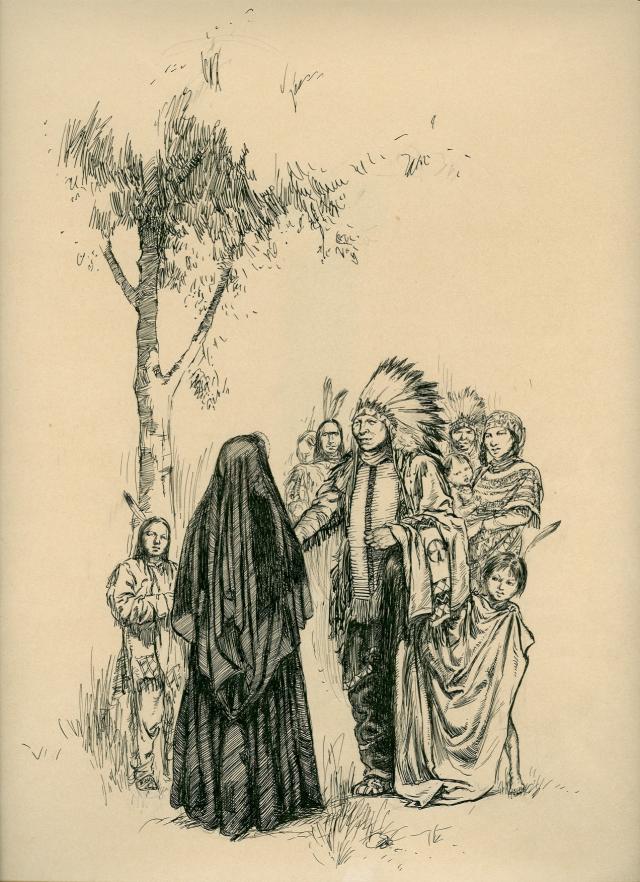 Philippine's arrival among the Indians by Robin

“Her prayer was a quiet looking and listening…”[1]

Ever since the Lord led Philippine Duchesne to desire to serve the natives in America, she planned and prepared for the Indian missions. After coming to America in 1818, at long last, in 1841, the goal was in sight. Not Philippine but Lucille Mathevon, RSCJ, had been nominated as superior of the Indian mission band. Philippine was not going to be among the group. Mother Mathevon had written to Madeleine Sophie Barat in April describing Mother Duchesne’s health, “There is scarcely a breath of life in her.” And later, on May 10, she wrote, “Mother Duchesne is growing considerably weaker. I fear she would not be able to go far.” Even Philippine herself admitted to Sophie on May 18, “My writing and my scratching out show you the weakness of both my head and my hand …. I await the will of God.” All around her preparations were being made for the Indian Mission and “there seemed to be no human hope of her going to Sugar Creek.”[2] What was going through Philippine’s heart and head as she was forced to accept the fact that she was not going on the mission?

But God has his ways. Father Peter J. Verhaegen, S.J came to the convent quite unexpectedly one morning. He had decided to visit the Sugar Creek Mission in July and thought it best for the religious to travel in safety under his escort. With him in the parlor were Mothers Gray, Mathevon and Duchesne, for Father Verhaegen always asked for Mother Duchesne. They were discussing the details of the trip and the preparations for three religious. Father Verhaegen had expected four. He turned to where Mother Duchesne was sitting and said, “But she must come, too.” She was the person he wanted most of all at Sugar Creek. “Even if she can use only one leg, she will come. Why, if we have to carry her all the way on our shoulders, she is coming with us. She may not be able to do much work, but but she will assure success to the mission by praying for us. Her very presence will draw down all manner of heavenly favors on the work.”

Thus the little band – including Philippine – boarded the Missouri River packet on June 29, 1841. Looking at the nuns and sensing their need, the passengers took up a collection of about $50 and provisions worth about $40, which they gave to the nuns.

And what were her thoughts once she arrived at the Mission? She wrote from the village of the Potawatomi, “we have reached the country of our desires. … No difficulties except when people worry too much about tomorrow.”  Unable to contribute as she thought she should, she faced the fact that she had failed in the dearest hope of her life. She was incapable of active work.