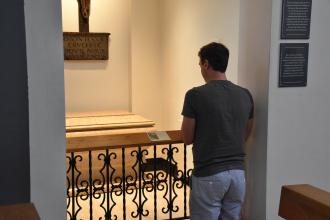 Old St. Ferdinand, a Shrine to Saint Rose Philippine Duchesne, is at the site of one of the earliest European settlements west of the Mississippi and was home to Saint Philippine from 1819 to 1827 and 1834 to 1840.

The St. Ferdinand parish was established in 1789. For a number of years, a log church served the community until the original portion of the existing church was constructed in 1821. The convent was built in 1819.

On September 7, 1942, the newly constructed Shrine of Saint Rose Philippine Duchesne was dedicated as Sacred Heart Catholic Church. The Shrine has beautiful stained glass windows that depict the life and ministry of Saint Philippine and other features, including a marble sanctuary and a statue of Saint Philippine. Original art murals and Stations of the Cross panels were painted by two nuns from the Ursuline community of Paola and have been a beautiful feature of the Shrine.

Saint Philippine Duchesne Memorial Park is located at the former St. Mary’s Sugar Creek Mission. The mission was the true end of the Trail of Death, where the Potawatomi lived for 10 years. In 1841, Philippine’s desire to serve among the native people came to fruition. She went with three other Religious of the Sacred Heart to Sugar Creek to establish a school for Potawatomi girls. The Indians named her “Woman Who Prays Always.”

After 10 years in Centerville (Sugar Creek), the Potawatomi were moved by the government to St. Marys, Kansas. Saint Philippine had returned to St. Charles but the other RSCJ who had gone to Sugar Creek with her moved with the Potawatomi to this new location. The RSCJs built a school there. The building is still standing and is next door to the Indian Pay Station Museum. Seven RSCJs are buried in Mount Calvary Cemetery in St. Marys, which is not far from the school.