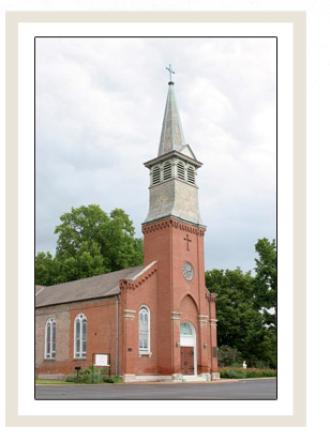 The St. Ferdinand parish was established in 1789. For a number of years a log church served the community until the original portion of the existing church was constructed in 1821.

The convent was built in 1819, and Mass was said in its chapel for the first time on Christmas Eve of that year.

The convent wing is one of the few brick buildings of this age and is almost in its original condition. It is considered one of the best examples in brick of the Federal style architecture in the state. A closet under the stairs in the hallway of the convent was used by Mother Duchesne as a makeshift bedroom. She reportedly slept on a straw mattress with a ragged blanket in the closet to be close to the chapel. A long upstairs room in the convent was used as a dormitory for the students. The third floor attic was the Novitiate and the linen room.

The cornerstone for the church, a gift of Mother Duchesne, was laid in February of 1821. In August of that year, Mary Ann Layton became the first American to become a Religious of the Sacred Heart when she made her vows at the convent.

Tours of the church, convent and rectory are available. The Shrine is located at 1 Rue St. Francois, Florissant, MO, 63031. Find out more at oldstferdinandshrine.com.