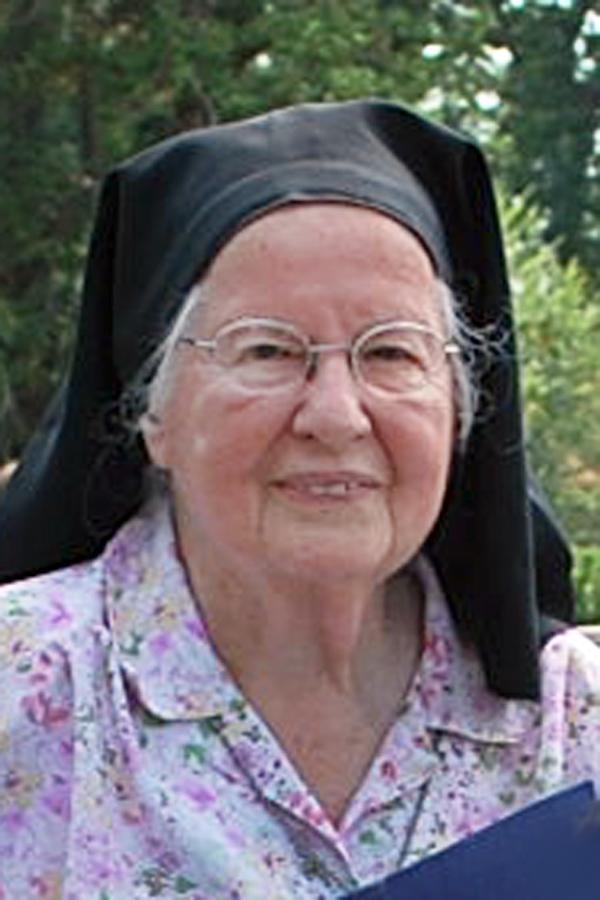 “As long as I have known Rose, she was ‘with God,’” said former U.S. Provincial Paula Toner, RSCJ. “I am rejoicing with her that she is now face-to-face (in our finite way of expressing things) or better, heart-to-heart.”

Rose Mae Mary Guidroz was born March 20, 1919, to Claiborne J. and Marie Matherne Guidroz in Franklin, Louisiana. In addition to her parents, she was predeceased by her twin sister, Anna (Mrs. Harold) Poché, a half-sister, Laura Guidroz, and two half-brothers, George Guidroz and Eddie J. Guidroz. She is survived by her nephew, Claiborne J. Poché of Daphne, AL, and three nieces, Anne Henley of Axis, AL, Mary Kilborn of Mobile, AL and Jeane Ann Guidroz of Lexington, KY. She will be remembered with fond affection by her sisters in the Society of the Sacred Heart, former students and colleagues, devoted friends and the staff at Oakwood who grew to love her during her final years.

Following her profession of first vows, Sister Guidroz served within the convent in St. Charles at a time when Religious of the Sacred Heart were cloistered. From 1949-68, she took care of the physical needs of the Religious and the students of Villa Duchesne Academy in St. Louis. She served in the dining room and infirmary and took care of the housekeeping and maintenance for the convent and school. Then in 1968, she began her teaching ministry, as a religion and science teacher for primary grades at Villa Duchesne. The following year, she went to Grand Coteau, Louisiana, where she would remain for the rest of her active ministry. She taught biology at the Academy of the Sacred Heart until 1994.

At the age of 75, her hearing began to diminish, so Sister Guidroz gave up her classroom and began working at St. Joseph’s Diner, a diocesan-supported program in Lafayette, Louisiana, and Thensted Center in Grand Coteau, where she tutored school children. She reported this time as one of the happiest periods of her life. The poor and homeless were a continual source of inspiration and joy for her.

During her time of teaching at Grand Coteau, Rose began to make candy, in order to raise money for the school. Little did she realize that this was to be the beginning of a new career in the Society!  In time, the sales for the benefit of the Academy began. As she described it, “After leaving the classroom, I had more time, so it mushroomed.” Soon she became known as “Sister Fudge.”

In 2010, Sister Guidroz entered a ministry of prayer and community service at Oakwood, in Atherton. As a resident of Oakwood, Rose not only delighted the community with a variety of chocolate goodies. She was an inspiration to everyone—gentle and smiling. Her severe deafness did not prevent her from being present at all community activities and she remained a presence to all to the end. She kept a current list of heads of state throughout the world and daily prayed for them.

Sister Guidroz earned a Bachelor of Arts degree in physical education, with minors in history and biology from the University of Southwestern Louisiana in Lafayette.

I taught in the Primary school at Villa Duchesne when Sr. Guidroz was surveillante.  As a beginner teacher, she was an immense help to me, and she always was very patient with me and with the children.  I shall always be grateful for her kindness, as well as her words of wisdom.  She was a beautiful example of prayerfulness in the acive life.  I rejoice for her now that she has received her eternal reward.

Grand Coteau - Rose Guidroz, RSCJ, recognized for her prayerfulness as well as unusual fudge making, 25th February, in Atherton, California. Sister Guidroz gave for 300 months at the Academy of the Sacred Heart, Grand Coteau. Born 20 March in 1919, to Claiborne J. and Marie Matherne Guidroz in Franklin, Louisiana, she was predeceased via her family, her two sister, Anna (Mrs. Harold) Poché, a half-sister, Laura Guidroz, and 2 half-brothers, George Guidroz and Eddie J. Guidroz. She is subsisted through her nephew, Claiborne J. Poché of Daphne, AL, and three nieces, Anne Henley of Axis, AL, Mary Kilborn of Mobile, AL plus Jeane Ann Guidroz of Lexington, KY. I recently submitted my assignment buy a degree online so before submitting he was even talking about her and telling what she did in her life.