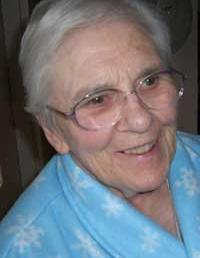 Religious of the Sacred Heart Mary Sutherland, hospital chaplain and Healing Touch practitioner died Sunday, September 30, at Oakwood, the Society of the Sacred Heart’s elder care center in Atherton, California. Her life will be celebrated in a Mass of Christian Burial at 10:00 a.m. Saturday, October 27th at Oakwood, 140 Valparaiso Avenue, Atherton, California, 94027.

Mary Kathleen Sutherland, only daughter of Kathleen Maud Wilson and William J. Craig Sutherland, was born in Swansea, Wales, United Kingdom on July 13, 1933. Her only brother, David, predeceased her and she is survived by her beloved sister-in-law, Constance, of Swansea. Following World War II, Mary was introduced to the Society of the Sacred Heart at West Hill in London and began attending Catholic Mass. She entered the Catholic Church just after her twenty-first birthday and entered the Society of the Sacred Heart three years later, in September, 1957. She professed first vows in 1959 and final vows in 1966, both in Woldingham, England.

Among Sister Sutherland’s first assignments was as catering manager at Woldingham Convent, preparing menus, placing orders, and even teaching cooking to classes in the school. In 1969, she moved to Hammersmith where she was in charge of domestic work at the College of d'Avery Hill. She then served in Newcastle from 1973 to 1982, first as deputy administrative officer, then as assistant catering manager at Northern Counties Newcastle Polytechnic and finally, as a student!

From 1982 to 1988, she served at Tunbridge Wells, first as parish sister, then as pastoral minister. Here she was involved in the RCIA, sacramental preparation, visitation of the sick, and a folk choir.

In the late 1980s, Sister Sutherland left England for San Diego, California, where she took a program in Clinical Pastoral Education run by Sister Anita Lapeyre, RSCJ. Her practicum was at the St. Madeleine Sophie Center for developmentally disabled adults in El Cajon, California. Her move to the U.S. became permanent, and she transferred to the U.S. Province. From 1991-2000 she served as hospital chaplain at Scripps Mercy Hospital in San Diego. She had certification as a Healing Touch practitioner. She became a naturalized citizen in 2001.

After sustaining permanent injuries from a fall Sister Sutherland took up residence at Little Flower Haven in San Diego, run by the Carmelite Sisters. In 2003, with great joy, she moved to Oakwood where despite her limitations she never lost her beautiful Welsh singing voice.