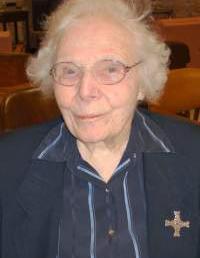 Religious of the Sacred Heart Mary Elizabeth Tobin, wise mentor, international and local leader, educator, and spiritual director, died at Teresian House in Albany, New York, on Sunday, September 9, 2012. An extraordinary model of how to live religious life, she loved life and was always ready to take on a new challenge. She will be remembered at a Mass of Christian Burial at 1:00 p.m. on Friday, September 14 at Teresian House. Visitation will begin at 11:30 a.m. in the chapel.  Burial will be in the Kenwood cemetery in Albany.

Sister Tobin was predeceased by her brothers Charles Tobin and Edmund Tobin, and sister, Alice Tobin O’Brien. She is remembered with fond affection by many loving nieces and nephews, Religious of the Sacred Heart around the world, former students and colleagues and the staff and residents at Teresian House, where she was a warm welcoming figure.

In positions of leadership most of her adult life, Sister was always straightforward, honest and often challenging, but her predominant characteristics were an intense interest in the person she was with and a passion to serve.

She returned from Rome in 1970 to serve as director of public relations and alumnae relations for Stone Ridge School of the Sacred Heart in Bethesda. From 1975 to 1989, she worked as spiritual director and counselor in retreat centers in Boston and Washington, D.C. Sister Tobin also served as the administrator for the Society of the Sacred Heart retirement community in St. Charles, Missouri, 1985-92. She was for many a pillar of strength, love, profound spirituality, and grounding wisdom. Even to her death she was full of life and deep love and fidelity for the Society.

The closing Kenwood in 2008 was personally difficult for Sister Tobin, and she truly appreciated the loving welcome the Sacred Heart Sisters received at Teresian House. She was deeply grateful for the love and care she received and wanted the staff and administrators to know her deep gratitude for being able to thrive as she lived her last days at Teresian House.

An alumna of Kenwood Convent of the Sacred Heart in Albany, Sister Tobin earned a Bachelor of Arts degree in sociology from Manhattanville College in 1938 and a Masters in guidance and counseling from Fordham University in 1953. She received a certificate in Spirituality from the Jesuit School of Theology at Loyola University, Chicago, in 1975.

I was a student (Class of '59) at Stone Ridge in Bethesda while Mother Tobin was there.  I had the great privilege of being a student under her tutilage.  Her image is etched in my mind of the old habit and I will always remember her.  Besides her teaching and daily guidance, one humorous memory I have is when she tucked up the skirt of her habit and ran with us on the hockey field.  She was quite the player.  That day she became one of us and she influenced our winning game.  I was on the Gold Team!  Another memory was when I returned for a visit with my sister and was standing in the Dining Room reception asking someone where Mother Tobin was.  She was standing in a nice suit right in back of me and she was now being referred to as Sister Tobin.  I must say I still like the old Habits.  You feel the reverence around them; just like the old stone churches.
She was an extraordinary woman and truly deserves all the honors she received during her long career with the Sacred Heart.  RIP Mother Tobin and God Bless you and your new home.

We girls of the 50's at Stone Ridge always seemed to think Mother Tobin was ours, even when she went on to greater fame.  She was unique and special among a whole lot of admirable Religious at that time.  I had the good fortune of visiting Mothers Tobin and Kondolf at Kenwood just a year before they were relocated.  We met, of course, in the parlor and spent over an hour talking about the good old days at SR.  I was not entirely certain Mother Tobin remembered me until, rather early on, she mentioned the mouse in the French teacher's desk drawer and the eight of us skipping a class and hiding in the woods.  Sharp, fun and loving.   RIP, dear RSCJ.
Frances Call. '58

I have very fond memories of Mother Tobin during my years at Stone Ridge. She was witty, and smart but always so kind. I also remember her playing field hockey with us with those long skirts hiked up!

I remember Reverend Mother Tobin vividly.  An energetic, gracious woman who dedicated her life to others.  I am sorry that she is gone but feel priviledged to have known such a extraordinary. woman. God bless her special soul.

Mother Tobin was an inspiration to many of us at Stone Ridge in the 1950s.  She was a wise counselor, an encouraging spiritual director, an understanding friend, and a fun sports enthusiast.  The SR Class of 1955 dedicated its yearbook to "Mother Tobin" (in part):  "Love is what she gave us,
Unceasingly,
And raised us to His Love,
Throughout our years she's guided us
And led us through the dark.
She's shown us light and joyfulness
And given us her heart. ......
To her we dedicate this book,
In loving gratitude,
That she may know our love and trust,
As we are sure of hers;
And together, though apart,
We'll live our years as she has taught......."

A few years ago Sister Tobin told me something that has turned out to be so true, and that I spend every day of my sixties trying to apply:
"Every year that you get older, you get free-er."
I now care much less what others think, am less dominated by the "should's" of my life, am more focused on what I know within my heart is right for me and on what will help me grow as a loving person.  Thank you, Sister Tobin.

In my senior year at Stone Ridge, I answered the phones in Hamilton House after school and on Saturdays.  I remember Sister Tobin always stopped for a chat with me on her way to the convent.  She took interest in me and on one occasion, shared a book she thought I might want to read.  Although my interactions with her were brief, it was very obvious to me that she was a very caring, kind woman who loved Stone Ridge and its "girls" long after her service as headmistress.  Rest in peace!

Sister Tobin became a close friend of mine within the past two years. With each visit, she taught me so much about friendship, determination, and hospitality. I have always admired her positive outlook on life and I am incredibly grateful for the time we spent together. Thank you Sister, and may you rest in peace.