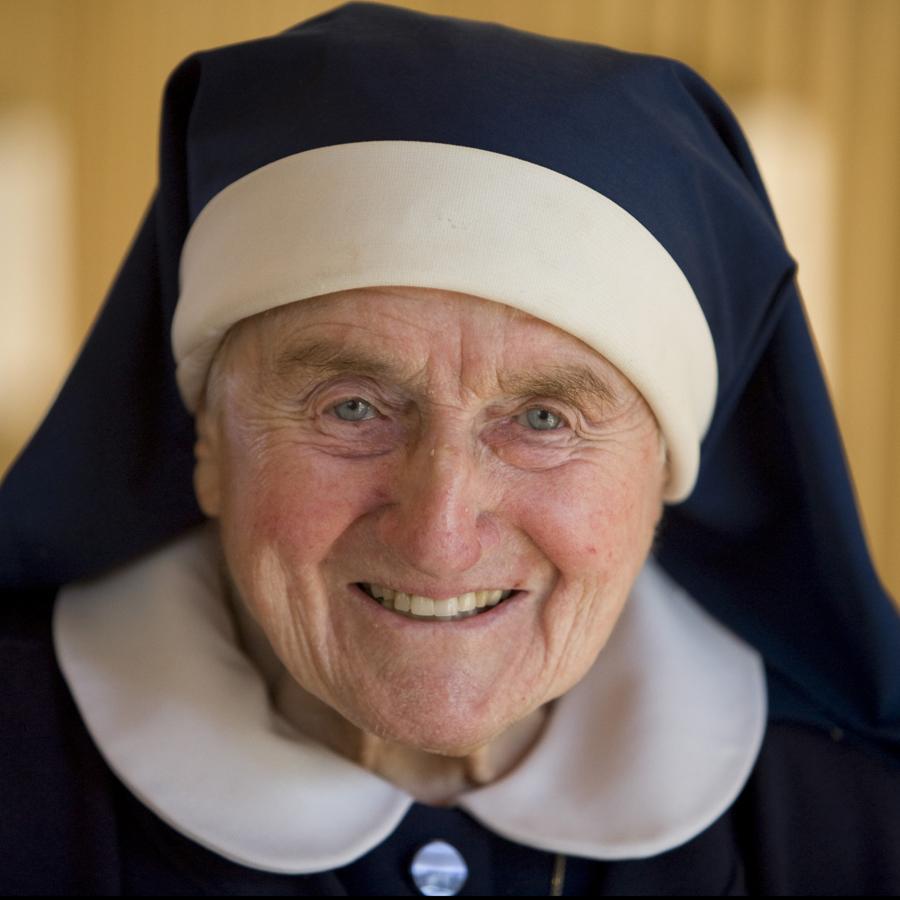 Religious of the Sacred Heart Helen Costello died Thursday, January 24, 2013, at Oakwood, the Society of the Sacred Heart’s elder care center in Atherton, California. Known and loved by many as the mistress of Costello’s Castle on the grounds of the Sacred Heart Schools in Atherton, Sister Costello’s ministry of service evolved by responding to the needs of those in her greater community. A memorial Mass will be celebrated in the Ravi Assembly Hall of the Johnson Performing Arts Center at Sacred Heart Schools, 150 Valparaiso Ave. Atherton 95027 on Friday, February 1 at 7:00 pm. preceded by viewing from 5:00 - 7:00 pm. The Mass of Christian Burial will be on Saturday, February 2 at 10:00 am in the Oakwood Retirement Community chapel on the same campus followed by burial in the Oakwood cemetery.

Helen Costello, the second eldest of six children, was born in San Francisco to Lucile and Francis J. Costello on October 14, 1918 during the international Spanish influenza pandemic. Miraculously, her mother, who had the flu at the time, survived. She is survived by her sister Kathleen Costello of Cupertino, Calif., brother-in-law, Albert Horn of San Mateo, Calif., sister-in-law Margaret Ann Costello of San Francisco and beloved nephews and nieces. In addition to her parents, she was predeceased by her sisters Lucile Horgan, Lorraine Horn, and brothers, David and Frank Costello. She will be remembered with fond affection by her sisters in the Society of the Sacred Heart, the staff at Oakwood and especially former students and colleagues, who found her a source of inspiration.

A 1935 graduate of Sacred Heart Academy in Menlo Park, California, Sister Costello wanted to enter the Society of the Sacred Heart, but the family disapproved. She worked for several years at San Francisco department stores, but followed her call to religious life and entered the Society in 1939. She made first vows May 25, 1942 and professed her final vows in Rome on February 9, 1949.

Sister Costello’s first assignment as a Religious of the Sacred Heart was at her own alma mater in Menlo. In the 1950s, she spent five years at Forest Ridge Academy of the Sacred Heart in Seattle and summers at San Francisco College for Women (now the Lone Mountain campus of the University of San Francisco), where she earned her Bachelor’s and Master’s degrees. In 1956, she returned to the co-educational elementary school in Menlo, where she would remain as teacher for sixteen years.

She had a particular affinity for educating boys. She trained altar boys, followed their sports teams, and built relationships that would last a lifetime. When the visits from “her boys” produced consternation among some of the other Religious, Sister Costello was invited to meet with the boys in another location. She took over a dilapidated old structure on the campus and her boys took on the renewal of the place—later to be called “Costello’s Castle.” Over the following years, the Castle had many renovations, until it began to resemble a decent dwelling, a teen haven. Before long, it was providing housing for parents of terminally ill children at Stanford Hospital or other people who needed a place to stay overnight. Sister Costello hosted teen parties, even hosting the Stanford football team on three occasions! She formed a service group titled “Castle Youth Helping Others” (CYHO), in which several hundred participated. Her ministry was set: ministering to teens and young adults, senior citizens, prisoners, people with handicaps (the “Handicapables,” Sister Costello called them) and terminally ill children and their parents. She ministered at the Children’s Hospital at Stanford, San Quentin Penitentiary and wherever she was needed.

She entered prayer ministry at Oakwood in 2000. Costello’s Castle closed in 2008.

It was said of Helen at the time of her 50th Jubilee, “She is a unique combination of being spiritual and good, but she never makes a thing about it.  She never talks theology, but lives it.”

Michael Svanevik and his wife Shirley Burgett wrote in a short biography, “She is an independent thinker, creating her own unique ministry. She has diverse associations, from bishops to gas station owners. She has influenced the wealthy and the ‘little folks.’ And ‘her boys,’ now men, continue to visit their ‘flying nun,’ whom they also called ‘Hurricane Helen’ (rushing somewhere), the ‘Blue Nun’ (always in a habit) or ‘Mother Goose,’ saying: ‘When your problems are beyond despair, Mother Goose is always there.’”

For your true and enduring friendship, for all you did for me and so many, for the laughter and great conversations we shared for all you gave to me in my life I will never forget and will keep your smile in my heart always. When my mother died you said I could still speak to her each day in prayer. I will do the same with you, dear mother, and best friend.
Your loving child,
Loryn

I miss you, Nanny, every day. You were such a blessing to my life...